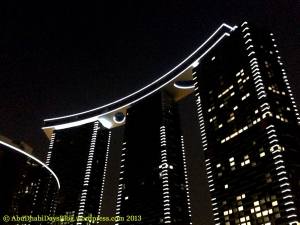 The Gate Towers at night.
Anyone else thinking about Tron?

These striking residential and commercial towers are not quite finished yet, but as of summer 2013 they are 98.28% complete, so they are nearly there. (source and source)

They are composed of three 65-storeys towers and a two-storeys penthouse bridge delicately sitting on top of them, which standing at over 240 meters it is believed to be the highest in the world of a residential kind. The bridge is also the largest and highest to ever been lifted, with its first two sections weighing 750-ton. The fourth and final section took four days to be forklifted in place. (source and source)

Click here to see interesting photos from the construction site which clearly showcase the incredible height of the penthouse bridge.

In recent times, the concept of ‘skybridges’ has become more and more popular in the world (see the Marina Bay Sand in Singapore or – somehow – the Elephant Tower in Bangkok) however no building reaches world-record numbers quite as these stunning Abu Dhabi towers.

What personally strikes me the most is that, despite its fantastic modernity, this is basically what Stonehenge would look like if it had been made by aliens. And I love it.

Where it is: Al Reem Island
Designed by: Arquitectonica, Khatib and Alami, Sorouh/Aldar, Hill International.

Posted on 27/09/2013, in Out and About and tagged abu dhabi, architecture, Emirates, Gate Towers, landmark, skyscrapers, travel, UAE. Bookmark the permalink. Leave a comment.