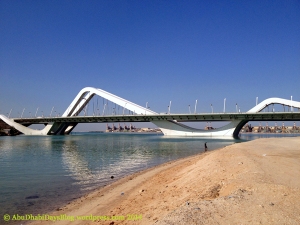 British-Iraqi Dame Zaha Hadid (also on wikipedia) is one of the most visionary and innovative architects of our times. Worldwide acclaimed for her fluid and creative designs, she has been the first woman ever to win the Pritzker Architecture Prize, which is considered the Nobel for architecture.

Her name was in the news recently because she designed Qatar’s Al-Wakrah stadium for the World Cup 2022 in Qatar and redesigned the new Tokyo National Stadium for the 2020 Olympic Games, to be set in Japan.

She also designed this incredible yacht, still in the process of be made reality, but guaranteed to give nightmares to all sailors out there. (I love it, but I must admit it would scare me out of my pyjamas if I were to see it approaching my boat on a dark, stormy night!)

The list of the iconic buildings she designed could go on for hours, but my personal favourites are the Aquatic Centre for the London Olympic Park, for the 2012 Olympic Games, the very recent Sackler Serpentine Gallery in London, and the MAXXI Museum of XXI Century Arts in Rome.

From a taxi riding on Sheikh Zayed bridge.

Now, I have another wonderful structure to add to my list: Sheikh Zayed Bridge, which was opened in 2010, is a triple-arched bridge inspired by the asymmetric shapes of desert sand dunes. It was awarded the Global Road Achievement Award in the Design category from the UN recognised International Roads Federation.

This bridge is 842 meters long and 64 meters high, and houses a two-way four lane highway spanning 140 meters. The cantilevered road decks are suspended from symmetrical steel arches, which form a sinusoidal waveform and give this massive structure its fluid silhouette. (source)

Named after HH the late Sheikh Zayed bin Sultan Al Nahyan, together with Maqta bridge and Mussafah bridge, this is one of the three main bridges connecting Abu Dhabi island with the rest of the city, and it is said to be the most intricate bridge ever built.

I really love it, and I can’t help by taking photos of it every time I am passing over it or seeing it from the distance: it looks amazing, both during the day and at night, when it is all lit by the impressive dynamic lighting created by Dutch designer Rogier Van Der Heide: he used Martin professional luminaries in subtle colours which gradually fade from a shade to another, flowing across the bridge’s spine and symbolising the connecting nature of the bridge and the energy that Abu Dhabi radiates across the water. (photos)

This innovative lighting can be customised and the different colours can mark national or religious holidays as well as other important events. As it happens with the lighting of the Sheikh Zayed Grand Mosque (about which I have written here), also this bridge’s lights follow the phases of the moon, and once a month both landmarks appear coloured in a deep blue shade. (source) (source)

Posted on 11/01/2014, in Out and About and tagged abu dhabi, architecture, bridge, Emirates, travel, UAE, zaha hadid. Bookmark the permalink. Leave a comment.